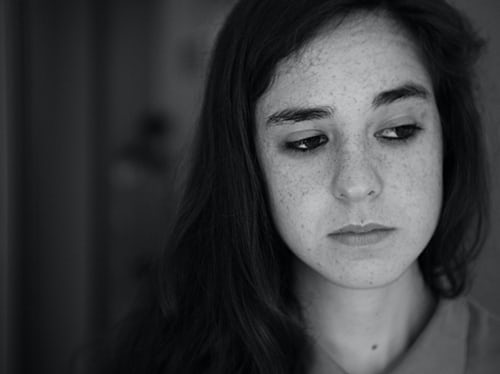 She Could Be Anybody’s Daughter

For every story of recovery from homelessness or addiction there are hundreds more unresolved, faces of crisis at our doorstep and in such need of someone to care. And if not for you – right here beside MEND – this young woman would have no one at all. Thank you….

“I sleep in tents… at the Metrolink…in open places where there are cameras or where someone is working late and can see me, you know? I used to hide from my Mom so she would not know I was homeless. But now she knows.”

This is a difficult story to tell you. Teresa is not her name but she wants you to know everything. “I’m not embarrassed to speak the truth,” she says. And she did, sometimes fighting tears and sometimes filling the room with her shy smile.

Teresa was at MEND to get a bite to eat and to brush her teeth. But also to hide from a man, a predator, she felt powerless to get away from.

“I’ve been homeless on and off for three years. I want to get clean so I can be with my two children, Julian and Annabel,” says Teresa. Her drug of choice is meth, and three years ago, before her whole world came crashing down, she was holding down a job in aviation maintenance. Her face lights up at this recollection: “I was always independent. I had my own home and car, and my children didn’t need anything.”

Yet, here she was now at MEND, talking about sleeping in brightly lit places with security cameras. Looking closer, you might wonder what went wrong for this young, fragile woman.

Teresa was like any high school student when her mother remarried and moved her family out of Pacoima, where she had spent most of her life. Left alone for days at a time, she experienced an incident….she pauses almost imperceptibly…and her eyes fill with tears. Her family didn’t believe her. So she began to turn to drugs to forget.

Despite this, she was still able to build a good life. Fiercely independent, she had several well-respected jobs and even paid her way to visit Europe. But when she was pregnant, her son’s father died. Soon after, she met another partner. When this relationship ended, she was left a single mother of two.

Then, she met someone she thought was a friend. And life began to unravel quickly. Seeing that Teresa was vulnerable, he began to threaten her children. “He was not a boyfriend.” She clarifies. “He moved in and never left. I was scared.” She was afraid to call the police so, instead, she left her kids with relatives and disappeared.

When she found herself in Pacoima again, she had nothing left. She had lost her children, her job and home.

She remembered, from years ago, her mother volunteering with MEND and happy memories of the Christmas program. So, she thought she might meet friendly faces here at MEND. She told us, “I never thought I’d be here to get help.”

And thankfully, because of your generosity, we are here for Teresa and thousands of hurting people. “I feel safe here…it is such a blessing,” Teresa says.

These days, Teresa comes to MEND to get a warm meal, clean clothes and hygiene products. Today she is obsessed with brushing her teeth. “I want the toothpaste and toothbrush more than anything,” she says.

She doesn’t take a lot; she has no place to keep things. She adds: “Sometimes I don’t want to eat much because I might not have anywhere to go to the bathroom later.” And she is constantly targeted by drug dealers, such as the man waiting outside. These are too common realities of a woman experiencing homelessness.

But, there is still a bright light of hope in Teresa’s eyes. She dreams of being a mother to her children again – of throwing a tea party for her daughter’s next birthday. She dreams of traveling again. And she said with a smile that talking to friendly staff at MEND reminds her of when she used to go to brunch with friends.

When our team offered to refer her to a rehabilitation clinic, she jumped at the chance. And we are left feeling thankful for being there to catch a strong young woman, making the difficult first steps to fight for her life again.

Thank you for helping us provide a stable, safe place for Teresa and so many others in the Valley. Thank you too, for never giving up on people in need.